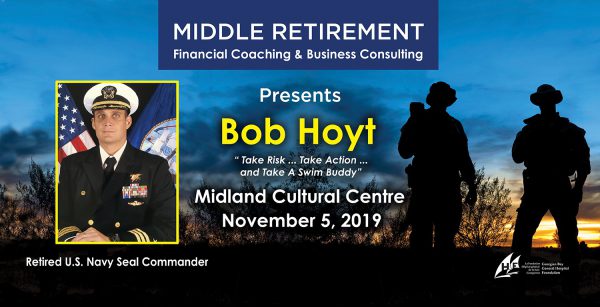 Tickets are $75, and can be purchased HERE.

Presented by: Middle Retirement, in support of the GBGH Foundation.

Join us for ONE night only, with special guest, retired United States Navy SEAL Commander John R. (Bob) Hoyt. Learn about the many obstacles Bob overcame though his experience as a special operations commander, and how he has implemented this experience in real life situations.

Bob Hoyt grew up outside of Boston, Massachusetts and enrolled in the US Naval Academy in 1985. Soon after, he was commissioned by the US Navy and immediately entered Navy SEAL training where he graduated with BUD/S (Basic Underwater Demolition/SEAL) class 166. Through his 22 years in the Navy, Bob did tours with various SEAL teams across the United States, and he rose through the ranks to become Commanding Officer of SEAL Team TEN and Special Operations Task Force Commander of TF17 in Iraq.

While serving as a Navy SEAL Commander, Bob learned he needed to look beyond himself and rely on his surroundings to survive and to keep his team mates alive as they advanced into the unknown. By carefully assessing risk and planning for it, having the courage to take action and keeping focused on the bigger picture, Bob was able to thrive and stay alive, not only for himself but his family, friends, other officers and members of the Navy under his command.

Today, Bob believes in charity and sharing his experiences to help others make decisions for a lifetime and generations to follow.

Bob is married with two daughters and currently holds the position of Director of Defense Programs for Jabil Corporation, a Fortune 500 contract manufacturing company in Florida.