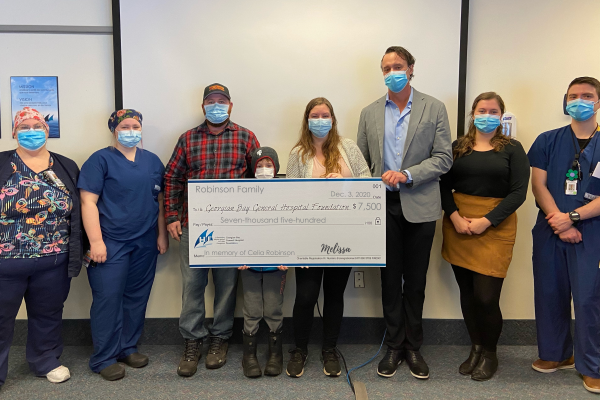 On Thursday, December 3rd, Mike & Melissa Robinson presented a donation of $7,500 to a very special care team at Georgian Bay General Hospital (GBGH), to honour the memory of their baby girl, Celia Marie.  Celia passed away at GBGH on Christmas Day 2019 from an undiagnosed genetic immunodeficiency but her family is incredibly grateful for the exceptional care they received from their doctors, nurses and respiratory therapists.

“December 3rd would have been Celia’s first birthday”, shares Melissa. “We wanted to do something special to celebrate her, and also wanted to take the opportunity to say thank you to the amazing team at GBGH who tried so hard to save our baby girl.”

On October 18, Melissa shared the idea of a baking fundraiser, with 100% of the proceeds being donated to GBGH, on her personal Facebook page. The virtual bake sale gained traction quickly, with hundreds of individual orders placed in less than 4 weeks. Shortly after, her sister Laura joined the efforts, selling hand-made wooden ornaments through her own Facebook page, with 100% of the proceeds also being donated to the hospital.

“I had no idea that it would get this big,” says Melissa. “I’ve been baking 6 days a week since October to get all the orders filled.  We are so blown away by the support for our fundraiser, and so thankful that we can honour Celia in such an impactful way.”

When you make a tribute gift to the GBGH Foundation in memory of a loved one, you are helping to empower Georgian Bay General Hospital to deliver exceptional health care. Thank you. 💗To learn more, visit: gbghf.ca/giving/in-memory/ ... See MoreSee Less

A big HEARTFELT THANK YOU to our ER Nurses! A donation has been made in their honour to the Heartfelt Thanks tribute program, as a thank you for the exceptional and compassionate care provided.If a Georgian Bay General Hospital team member made a difference in your life, please consider giving back by making a donation in their honour. Learn more here: gbghf.ca/heartfeltthanks/#HeartfeltThanksForGBGH #Give2GBGH #gbghmidland #ShareYourStory #HospitalHeroes #communitycares #GBGH ... See MoreSee Less

Shoutout to ClubHouse Fitness in Midland for this amazing #BusinessCares initiative!For the months of December 2022 and January 2023, ClubHouse Fitness will be donating a portion of sales from ALL new memberships purchased during this time to the GBGH Foundation! “ClubHouse Fitness is excited to promote good health and wellbeing and is happy to support the GBGH Foundation. We aim to build a strong community through health and fitness and encourage all individuals to enjoy a welcoming and fun fitness class experience. We are thankful to have a wonderful local hospital and be able to support the local community.” ~ Owner, Aimee Piech.To purchase a membership, visit: clubhousefitness.ca/memberships#gbghmidland #communitycares #businesscaresforGBGH #gbghf #HeartfeltThanksfromGBGH ... See MoreSee Less