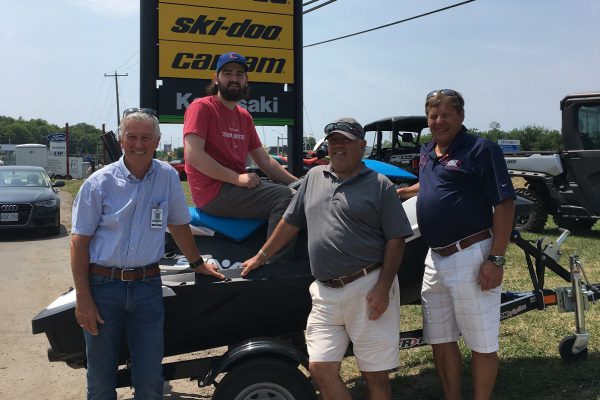 On July 4, volunteers from the Drop the Ball Raffle committee gathered with representatives from Georgian Bay General Hospital (GBGH) and the GBGH Foundation to draw one ticket for the early bird prize of a 2019 SEA-DOO and trailer.

Nathan Robitaille, a local resident and Penetang Kings alumni, was the lucky winner.

“I just bought a ticket to support the hospital,” says Robitaille. “I didn’t even know what the prizes were, so I still can’t really believe I won a SEA-DOO.”

Nine additional prizes winners will be determined by a Helicopter Golf Ball Drop Raffle on Sunday, August 4, 2019 at the Midland Golf & Country Club.  Numbered golf balls will be dropped from a helicopter hovering at 100 feet above the Midland Golf & Country Club’s first fairway.  There will be nine flags and cups within the drop area, each representing one of the prizes. The ball which lands in the hole or is closest to the pin wins.  If multiple balls land in a hole, one ball will be drawn for the prize.

The nine remaining prizes include:

Tickets are $20 each or three for $50, and all proceeds will support new and much-needed equipment purchases at Georgian Bay General Hospital.  Tickets can be purchased at Bourgeois Motors, Factory Recreation, Scotiabank Penetanguishene, Elmvale Home Building Centre and GBGH. Call 705-526-GIVE (4483) for more information.