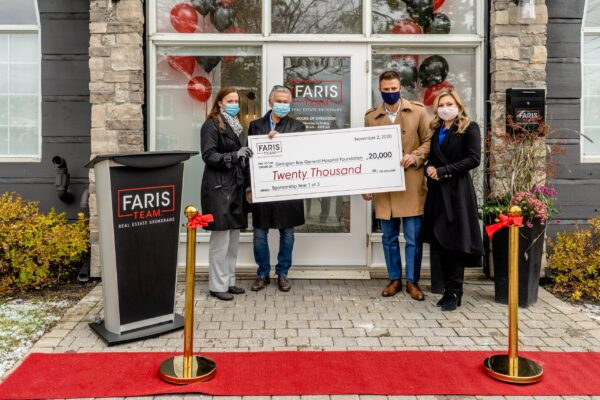 On November 2, 2020, Faris Team Real Estate Brokerage celebrated the Grand Opening of their Midland office at 531 King St. As part of the celebration, Faris Team presented the Georgian Bay General Hospital (GBGH) Foundation with a cheque for $20,000.

Earlier this year, Faris Team made a generous 3-year commitment to be the presenting sponsor for the GBGH Foundation annual gala.  This was the first year of the partnership, with Faris Team presenting the Foundation’s Power of Giving Virtual Gala in August.

A big HEARTFELT THANK YOU to the team on 2 East! A donation has been made in their honour to the Heartfelt Thanks tribute program, as a thank you for the exceptional and compassionate care provided.If a Georgian Bay General Hospital team member made a difference in your life, please consider giving back by making a donation in their honour. Learn more here: gbghf.ca/heartfeltthanks/#HeartfeltThanksForGBGH #Give2GBGH #gbghmidland #shareyourstory #HospitalHeroes #communitycares #GBGH Georgian Bay General Hospital ... See MoreSee Less

May is Legacy Month! Susan Robillard & Phil DeBruyne have been consistent supporters of their community hospital, Georgian Bay General Hospital, for more than 20 years. Susan’s late father, Gil Robillard, was a visionary, and passionate about planning for the future. On his passing in 2007, the Gil Robillard Endowment Fund was established through the GBGH Foundation, and the community was invited to honour Gil’s memory through donations which would lay the groundwork for a strong future for GBGH. In 2020, Susan & Phil granted funds from the Gil Robillard Endowment to purchase 22 acres of vacant land, adjacent to the current GBGH property. Thank you Susan & Phil! Ready their full story here: gbghf.ca/your-impact/your-stories/generations-of-commitment-to-the-community/ #give2GBGH #gbghf #communitycares #GBGHFlegacygiving #gbghmidland #gbgh #heartfeltthanksfromGBGH #leavealegacy #legacymonth ... See MoreSee Less

The Nicole Pattenden Landscape Design team has worked tirelessly this past week to complete an amazing project for the Georgian Bay General Hospital Foundation's new location. This incredible donation of new walkways and landscaping has made our new home so beautiful and welcoming. We want to say a big Heartfelt THANK YOU to the Nicole Pattenden Landscape Design team for planning and executing the project, Kobes Nurseries Inc. for donating the plant material, Oaks for donating the pavers, and SC - The Depot for donating the Hpb, polysand, soil and mulch. #GBGHF #CommunityCares #HeartfeltThanksfromGBGH #Give2GBGH #GBGH #BusinessCaresforGBGH #LandscapeDesign #GBGHMidland ... See MoreSee Less