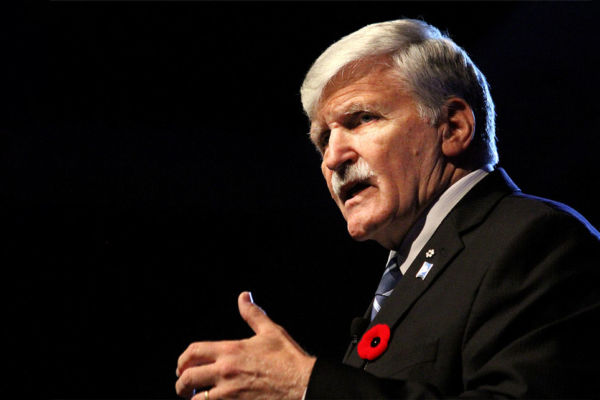 On Saturday, September 24, 2022, the Georgian Bay General Hospital (GBGH) Foundation will host the Power of Giving Hybrid Gala at Discovery Harbour in Penetanguishene. With both in-person and virtual options available, this year’s event is presented by Faris Team Real Estate Brokerage, and will be co-hosted by Power of Giving committee chair, Sara Lankshear and General Roméo Dallaire.

A celebrated advocate for human rights, General Dallaire is a respected author, government and UN advisor, and former Canadian Senator. Throughout his long and distinguished military career, General Dallaire most notably led the UN peacekeeping mission in Rwanda during the 1994 genocide when 800,000 lives were brutally taken in less than 100 days.  His courage and leadership during that mission, and his decades-long battle with PTSD, have earned him international respect and commendation which continue to this day.

“We are honoured to have General Dallaire join us for this year’s Power of Giving Gala,” says Nicole Kraftscik, executive director, GBGH Foundation. “He is a passionate speaker, and a courageous advocate for mental health. He has devoted decades of passionate leadership and advocacy to the issue of Post-Traumatic Stress Disorder (PTSD), and we are privileged to have him share his insight and experience with us as co-host on September 24.”

“The Impact Fund addresses the highest priority needs identified by the team at GBGH,” says Kraftscik. “Building a comprehensive acute mental health program at our hospital, and bringing more mental health beds to our region, is a top priority, and that’s why we are focusing on the critical need for more acute mental health services at this year’s gala.”

Tickets to attend the Power of Giving Gala in person are $150 each, while virtual event attendance is free with pre-registration. The in-person event begins at 5pm, following by the live stream at 7pm. For more information, to purchase tickets or to register, visit www.GIVE2GBGH.ca or contact the Foundation office (foundation@gbgh.on.ca or 705-526-4483).