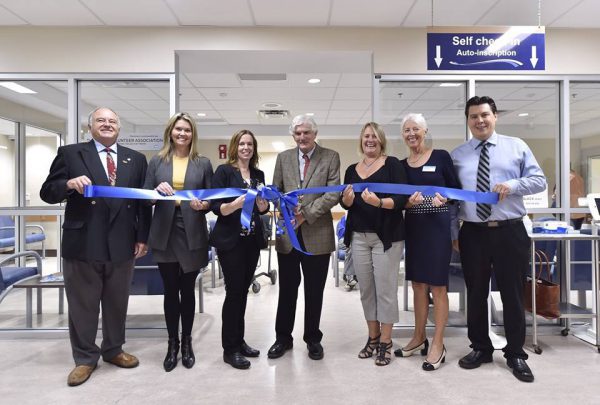 “The hospital’s focus when planning this redevelopment – even from the earliest days – was to re-build the ED in a way that best serves our patients,” says Gail Hunt, president and CEO, GBGH. “Our focus of providing our community with exceptional care meant our ED needed to expand and modernize to meet the growing demand for services. When the original ED was completed in 1976, it was built to serve 17,000 patient visits and was a single room with curtains. Now we see 47,000 ED visits each year. It was time GBGH developed a department to match our volumes.”

The ED redevelopment has been one of the largest projects in the hospital’s history. Phase 1, completed in 2014, was entirely funded through community support. With a price of $5 million, this 6,000 square foot addition included a new ED entrance, triage area and trauma rooms.

“The community believed in the need for a new ED and without their support, the project would have never happened,” says Kathy Elsdon-Befort, interim executive director, GBGH Foundation.
“GBGH’s loyal supporters have a history of being very generous when the hospital needs them the most. We needed a bigger, modern ED and they were there for us the whole way, also funding 10 per cent of Phases 2 and 3. They’ve never let GBGH down.”

The final stage of construction, completed in September 2018, posed the most challenges due to closures of the waiting room and regular See & Treat area where the ED sees 60 per cent of its patients. Now complete, this section includes a new See & Treat, an expansion to accommodate ED administration and staff areas, and a new waiting room. The new waiting area comes complete with both an isolation section and a children’s play area, produced by Keebee Play of Midland and donated by Mark and Carol Cruden, owners of McDonald’s Restaurants in Midland, Elmvale and the Midland Walmart.

After construction, the ED team of staff, credentialed staff and volunteers worked diligently to prepare the space for opening. This included moving in equipment, orientating staff with the new space and running simulations to ensure safety and quality.

“I would like to acknowledge the ED team for their patience and professionalism throughout the three stages of the ED redevelopment,” says Dr. Patrick McNamara, chair, GBGH Board of Directors. “Their dedication to patient care despite the constant construction and change is a testament to their belief in what a new department would mean for the hospital and its patients. I’d also like to thank the community for its cooperation and understanding during the renovations. We were making the best of a challenging situation and we hope you see it’s been worth it in the end.”

See what your generosity has accomplished for our community!  Thanks to Overstreet Media Productions for producing this incredible video for us.