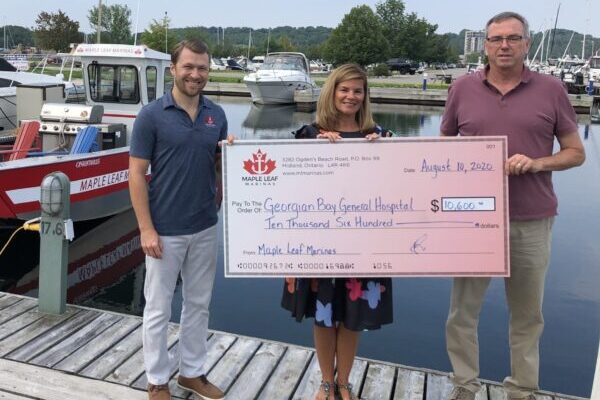 By the end of the weekend, the five had almost achieved 100,000 litres and would have if Mother Nature hadn’t rained on the parade.  The event was still an amazing success, thanks to 85,593 litres of fuel sold for a total of $8,593, plus a donation of $600 from an anonymous boater and an additional $1,407 donation from Dave Rozycki, president of Maple Leaf Marinas.

What legacy will your family leave behind? For Susan Robillard, her late father, Gil Robillard, was a visionary, and passionate about planning for the future. On his passing in 2007, the Gil Robillard Endowment Fund was established through the GBGH Foundation.Gil’s strategic vision became a legacy in 2020, as Susan & Phil granted funds from the Gil Robillard Endowment to purchase 22 acres of vacant land, adjacent to the current GBGH property. This land will be held in trust, enabling the hospital to grow to meet future demands for health care services.To read more about this legacy gift, visit: gbghf.ca/gbgh-foundation-purchases-land-to-secure-future-development-space-for-hospital/#legacygiving #leavealegacyforGBGH #plannedgiving #gbghmidland #communitycares #leavealegacy ... See MoreSee Less

This is the last week to make a donation at RONA Midland towards the Lowe's Canada Heroes Campaign!Make your donation at RONA in Midland, and Lowe's will match 50% of donations, up to a maximum of $2,000. Thank you Lowe's and RONA for supporting the Georgian Bay General Hospital Foundation! #heroescampaign #businesscaresforGBGH #Rona #SupportGBGH #Give2GBGH #GBGH #gbghmidland #communitycares #lowescanada ... See MoreSee Less

From September 8-17, Georgian Bay General Hospital celebrated 10 Days of Gratitude! This week of prize draws, free meals and ice cream was made possible thanks to the generosity of two #BusinessCares partners. Team Hawke Realty, Brokerage and Jenna Lorette (The Mortgage Centre), sponsored the 10 Days of Gratitude to show their appreciation for the hard-working GBGH Team."At Team Hawke Realty, we believe in supporting our local community," shares Jim Hawke. "On behalf of our entire team, we wish to express our sincere gratitude to the amazing staff at GBGH for their continuous hard work and dedication!""As a community we rely on the hospital and staff to be there for us everyday," shares Jenna Lorette. "We cannot say thank you enough for the strength and persistence they continue to show throughout this pandemic. We hope the 10 days of gratitude gave you a boost to continue with the incredible work you do." ... See MoreSee Less