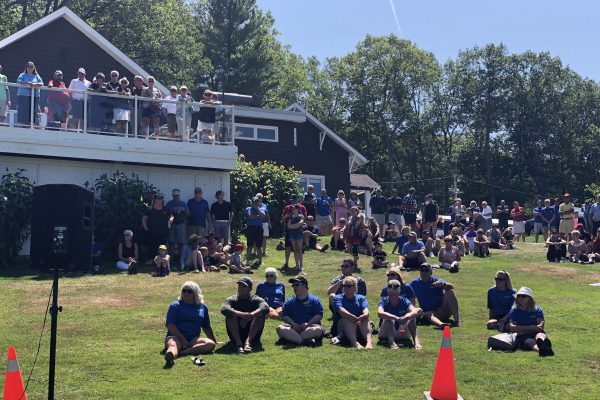 On August 4, hundreds of spectators gathered to witness our community’s first ever helicopter golf ball drop raffle at the Midland Golf & Country Club.  More than 6,000 tickets were sold, and the corresponding numbered golf balls were dropped from a helicopter to determine the lucky prize winners.

“So many people have been involved in making this unique partnership event a success,” says event organizer, Gerard La Chapelle.  “All of our volunteers, the prize partners, the Midland Golf & Country Club and the GBGH Foundation team have all worked together to help support our Georgian Bay General Hospital with proceeds of $55,000.”

All the funds raised will support critical emerging care needs at Georgian Bay General Hospital, which will help to purchase important patient care equipment such as IV Infusion Pumps, Telemetry Packs for ICU and an ultrasound machine.

“It is inspiring to witness our community come together in support of Georgian Bay General Hospital,” says Nicole Kraftscik, executive director, GBGH Foundation.  “We rely on our community to fund all of the equipment and infrastructure upgrades for our hospital, as the government does not fund these critical capital expenditures.  Our sincere thanks to Gerard and his team of volunteers for this incredible donation.”

The winners in the raffle are:

Jack Blanchette – Weekend for 2 in Niagara on the Lake