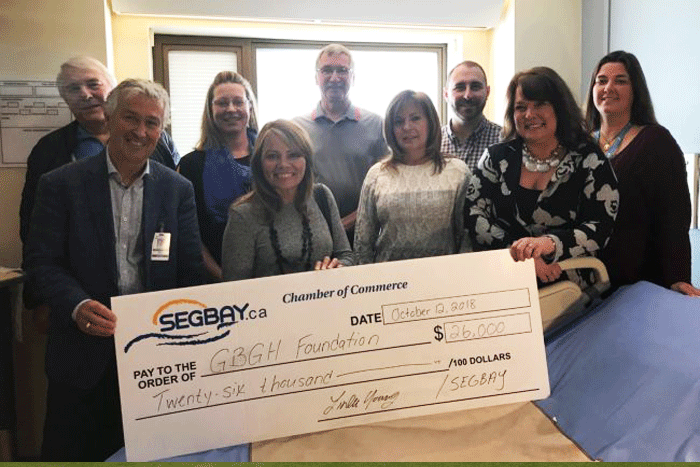 PORT SEVERN – The Southeast Georgian Bay Chamber of Commerce (SEGBAY), in partnership with 104.1 The DOCK and KICX 106, hosted its 5th annual golf tournament. The golf tournament raised $32,000, with $26,000 dedicated to the renovations of patient rooms at the Georgian Bay General Hospital (GBGH) and $6,000 for the seniors’ residence at Wendat in Penetanguishene. The tournament took place at Bonaire Golf and Country Club in Coldwater on August 14, 2018.

Fred Wareing, Chair of the Golf Tournament Committee, stated: “It was a fantastic day. We had a great turn-out with 152 golfers on the course, followed by a fantastic dinner, fabulous auction, silent auction, and raffle. We even had a hole-in-one winner, who went home with a fabulous side-by-side from Team Powersports. The weather couldn’t have been better, and the whole day went off without a hitch.”

Wareing went on to say: “The success of this event was possible because of the generosity of our Title Sponsor, Newmarket-Tay Hydro, as well as a large group of other sponsors. The golfers and other diners also opened their wallets during the auctions and raffle. Our sincere thanks to a hard working committee and a great group of volunteers and to the dedicated Bonaire staff.

We thank our many sponsors, who will be listed on our website in the next few weeks. This tournament couldn’t have been accomplished without the hard work of so many: the staff at Bonaire, the Golf Tournament Committee, the volunteers, the enthusiastic golfers, businesses and individuals.