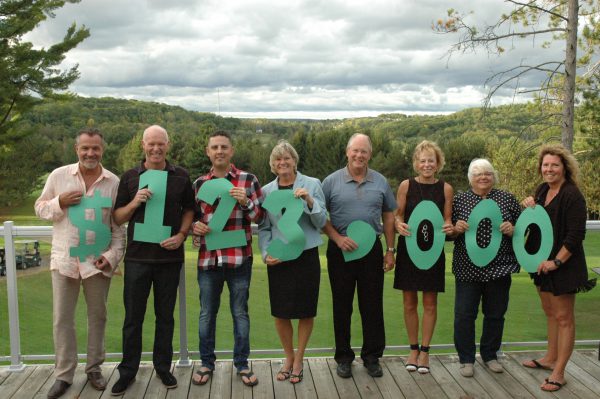 Midland, ON (June 18, 2018) – Toronto-based Urbacon has made a 5-year $100,000 commitment to the Glenn Howard Charity Golf Tournament with all proceeds benefiting the Georgian Bay General Hospital (GBGH).

“We are very excited to have Urbacon back as our title sponsor for the 3rd Annual Glenn Howard Charity Golf Tournament” said Glenn Howard. “Urbacon’s continued commitment to supporting the Georgian Bay General Hospital with their 5-year partnership pledge is simply outstanding.”

This year, funds raised will be used to help GBGH with the OR Expansion Project which will include advancing the surgical services offered.

“Community hospitals are vital to the health and well-being of the people who live, work and vacation in the area, including myself,” said Chad Weatherell, Director at Urbacon. “We believe it’s extremely important to do our part in supporting GBGH, and in turn the communities it serves, through our ongoing involvement with the Glenn Howard Charity Golf Tournament.”

Support such as that provided by Urbacon is integral to the success of the Georgian Bay General Hospital Foundation’s (GBGHF) goal to reach its fundraising targets now and in the future.

Partnerships with the GBGHF are key to the on-going success of the Hospital. In addition to community support through donations, over 200 community members volunteer at the Georgian Bay General Hospital on a regular basis.

“Although Urbacon is a Toronto-based company, they understand the important role community hospitals play for our residents – both permanent and seasonal,” says Gail Hunt, president and CEO, GBGH. “For many people, GBGH is their home hospital, but for some, it’s their hospital away from home. We want our operating rooms to be current – with the latest technology and tools – so whether it’s an emergency or routine surgery, everyone has the best care during their time here. By supporting the Glenn Howard Charity Golf Tournament, Urbacon is helping make this happen for our patients.”

For more information on the GBGH Foundation, and details on how to get involved, click here.

In the event we reach our fundraising goal for the Operating Room Expansion Project, we will direct additional funds to another area or equipment purchase of greatest priority for the hospital. Thank you for your support.