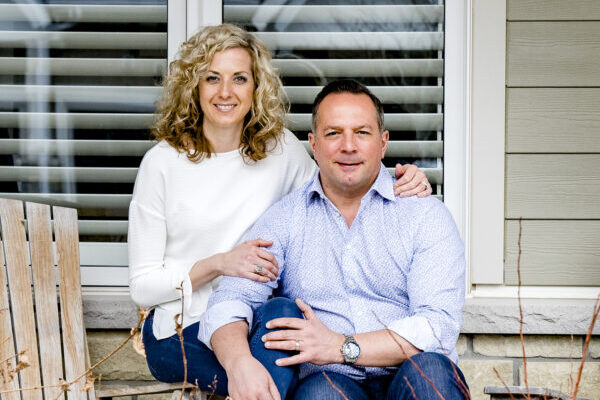 “One day I was healthy, and two days later my entire world was turned upside down.”
~ Michael Thor

When Michael Thor arrived at Georgian Bay General Hospital (GBGH) suffering from severe stomach pain and a rapidly increasing fever, he knew that there was something seriously wrong. But he never expected that a CT scan would show he had a perforated bowel and needed immediate life-saving surgery.

“Everything moved so fast,” recalls Michael of his shocking diagnosis. “Dr. Sacks, my surgeon, came in and told me that my temperature was going up. I was going into septic shock and there really wasn’t a lot of time. I had to have surgery and I needed to do it right now. She said she could get her surgical team assembled within an hour.”

“I had a temperature of 106 degrees by then and hospital staff was packing my body in ice and giving me morphine for the pain. I was kind of out of it with the pain meds, but my wife Sarah was in shock and deeply worried. She asked Dr. Sacks if she would recommend this surgery if it was her husband. And Dr. Sacks told her, ‘Absolutely. You don’t really have a choice. This surgery needs to happen now.’”

With no time to spare, Michael underwent an emergency six-hour surgery while Sarah anxiously waited for news.

“The infection was worse than Dr. Sacks thought,” says Michael. “She estimated the surgery would take two hours, but the infection was so bad, that it took six hours and they had to remove 2.5 feet of my bowel. I will never be able to thank Dr. Sacks enough for assembling her team so quickly and performing the surgery. They saved my life! And the nursing staff that took care of me, both in surgery and while I was recovering in the hospital, were absolutely exceptional. I am so profoundly grateful for the care that I received.”

Having lived in the community for 25 years, Michael and Sarah are long-time donors of the hospital and understand the importance of supporting their community.

“While I was in the hospital, I learned that GBGH could only perform one surgery at a time, because the surgical video tower in the second operating room wasn’t functional for most procedures,” says Michael. 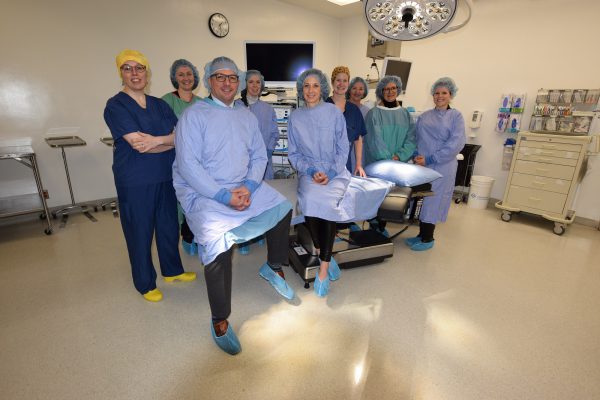 “Sarah and I could not have imagined if I’d had to wait for surgery, or if someone else with a life-threatening condition had to wait while I was in there, so we decided to raise funds to purchase a second video tower,” says Michael. The Thors personally committed $10,000 to the project and nine friends and clients collectively contributed the other $70,000 for this essential operating room upgrade.

“Our hospital cares about you and in return we need to really care about our hospital. We need to have the best equipment for our doctors to perform surgery and care for our community.  I was lucky to have the care and surgery I needed within my community. I encourage everyone to get involved – in any way they can – to help our hospital. You never know when you or a loved one will need it.”

A big HEARTFELT THANK YOU to the Emergency Department! A donation has been made in their honour to the Heartfelt Thanks tribute program, as a thank you for the exceptional and compassionate care provided.If a Georgian Bay General Hospital team member made a difference in your life, please consider giving back by making a donation in their honour. Learn more here: gbghf.ca/heartfeltthanks/#HeartfeltThanksForGBGH #Give2GBGH #gbghmidland #shareyourstory #HospitalHeroes #communitycares #GBGH ... See MoreSee Less

June is National Indigenous History Month, where we take time to recognize the rich history, heritage, resilience and diversity of First Nations, Inuit and Metis Peoples across Canada. We honour Indigenous heritage by supporting and promoting local Indigenous businesses. Waaseyaabanokwe Designs shares Ribbon Skirts, Ribbon Shirts and Beadwork (some for sale and some not) all hand made by Star Cherie Jamieson! Check out her page for more information! #NIHM2022 #IndigenousHistoryMonth #supportlocal #indigenousbusiness ... See MoreSee Less

The #PowerofGivingHybridGala is happening on Saturday, September 24th! This event would not be possible without our amazing sponsors. A special THANK YOU to LabX Media Group, a Power of Impact sponsor! “Georgian Bay General Hospital is a cornerstone of our community that has an incredible impact on so many lives, now more so than ever, and LabX Media Group and our employees are proud to support the foundation’s premier Gala event.” ~ Jamie Burns, Vice President, LabX Media Group. Thank you to LabX Media Group! ♥ Learn more here: www.labxmediagroup.com.#PowerofGivingHybridGala #Give2GBGH #SupportGBGH #CommunityCares #Sponsorship #businesscaresforGBGH ... See MoreSee Less